In addition to all of their other incredible capabilities, one of the most impressive things about modern phones, like Android smartphones, is their ability to capture video and audio. This can be maximized by using a wireless USB mic with the phone.

In addition to all of their other incredible capabilities, one of the most impressive things about modern phones, like Android smartphones, is their ability to capture video and audio. This can be maximized by using a wireless USB mic with the phone.

If your wireless USB mic won’t work with your Android phone, it’s probably because you need to download an app from the Google Play Store. There are several apps that support USB mics, including Open Camera and FilMiC Pro. These apps are designed predominantly for filmmaking and video editing on your phone.

Thanks to the advancements in smartphones and wireless recording equipment, you no longer need to carry around bulky cameras and large microphones to shoot a professional-level film with high-quality audio.

Many content creators now rely on their phones rather than using actual cameras to shoot footage.

In this guide, we’ll explain what you need to do to get your wireless USB mic working with your Android phone.

Why Isn’t My Wireless USB Mic Working With an Android Phone?

Although all Android phones have inbuilt microphones that you can use to capture audio, they’re not always the best quality. This is because the microphones are very small in comparison to the professional condenser or dynamic mics used in video and audio production.

Even if you own a high-end Samsung smartphone, if you’re serious about making high-quality recordings you’ll probably want to connect an external USB mic to the phone to improve audio clarity. The problem is, that some Android phones, particularly those made by Samsung, don’t always work with wireless USB mics.

This can be frustrating, especially if you’ve invested in a microphone for the specific purpose of recording audio on your Android phone. If the phone fails to recognize the mic, you won’t be able to connect it and therefore it will be unusable.

Thankfully, there is usually a simple solution to this problem. Android phones may require a 3rd party app that is designed to facilitate USB audio interfaces, which can make the USB wireless microphone compatible with the device.

There are several of these apps available, each with different features and capabilities. I’ll describe them in detail shortly, but before you download them, it’s important to check that there isn’t another issue causing the microphone not to work with your Android phone.

Although this may seem like an obvious thing to consider, for the microphone to be compatible with your phone they must use the same USB connector. Many Android phones use USB-C connectors, so you may need to use an adapter if your phone has a different connector.

If it’s not the connector that’s causing the problem, check to see whether your wireless microphone requires a Bluetooth connection to link up to your phone. You may need to unpair the devices and reconnect them to rule out a poor Bluetooth connection being the reason that you’re experiencing issues.

Once you’ve ruled out the above problems, you can find the best apps that will get your wireless USB mic working with your Android phone below.

You can find an app that does pretty much anything these days, so it should come as no surprise that several have been developed to aid content creators and video editors who need to connect their wireless mics to their Android phones. Here are the best options for you to choose from:

Each of the apps listed above is different in many ways, but the one key thing that they have in common is that they accept USB audio input. This means that they can connect the microphone to your Android phone, essentially acting as the middle man between the two devices.

You might find that some of these apps are well suited to your specific requirements for recording audio, while others may not. I’d recommend downloading a few of them to test out on your Android phone, to see whether they will help you to create the content that you desire.

Open Camera is the most popular choice and has been downloaded hundreds of thousands of times on the Google Play Store. This app is free and is focused mainly on visual elements of photography and video capture, but it also allows you to edit and record audio.

Another great thing about Open Camera is that it allows you to record audio with your USB microphone while simultaneously shooting a video so that you can add voiceovers in real-time. You can then edit and process the content afterward, or merge it with other footage and audio.

FiLMiC Pro is another great Android app that allows you to connect a USB microphone and use it to record. This app is designed to allow you to create professional quality video and audio content using your Android phone.

Check out this YouTube video that shows you how to use FiLMiC Pro.

With a wide range of mixing and editing tools, along with the freedom to change the video and audio quality or tailor the specific visual and sonic settings, FiLMiC Pro is a great choice for Android users who want to produce the best quality content possible. It is a little more complex than some of the other apps we’ve listed, though.

Footej is another solid choice for those who enjoy the simplicity and would like to use their wireless USB microphone to record audio to accompany their videos on an Android device.

The other two apps we listed are also worth checking out if you find that these apps aren’t right for the type of audio recordings you’re hoping to make on your Android phone.

How to Connect a USB Mic to Android Phone

Connecting a USB mic to your Android phone should be just as easy as connecting it to a laptop or computer. The great thing about USB microphones is that they don’t require an external audio interface because the USB connection essentially acts as the interface.

This means that you can connect high-quality condenser mics, like the Samson Go Mic, to your Android phone and use it to record any type of audio you want. Most USB mics designed for use with smartphones are compact and practically sized, which is another bonus. 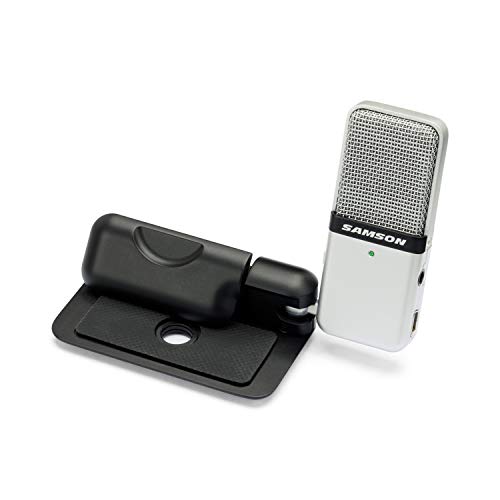 To connect a microphone like the Samson Go Mic to your smartphone, you need to use the USB connector which goes into the audio port in your phone. If the two connectors are incompatible, you can use a USB to audio jack adapter to solve this problem.

Make sure you check to see which connector type your phone has, and which USB type the microphone uses so that you can get the appropriate adapter.

Some microphones can also be connected to an Android phone via Bluetooth. To connect the two devices, simply follow the same process that you would if you were connecting headphones or wireless earbuds to the phone.

The Bluetooth microphone should be recognizable if you go to the list of nearby devices on your phone. You can then pair the two devices together, which should make the mic usable with the phone.

Generally speaking, Bluetooth microphones won’t provide the same level of clarity as USB condenser microphones. However, they’re great for making calls or recording audio that doesn’t necessarily need to be of the highest quality.

Compact USB microphones that can be used with your smartphone will usually be of the condenser variety, which makes them great for recording voiceovers, singing vocals, or any other sound source you might need for your content creation.

Dynamic microphones are less commonly used with smartphones, probably because they’re not as sensitive as their condenser equivalents.

If you’re having issues using the mic after trying both of these methods, downloading the apps we mentioned earlier in this guide should rectify the problem so that you can start making high-quality recordings in no time.

Where are the microphone settings on Android phones?

Can Blue Yeti work on Android?

Yes, the Blue Yeti microphone is a popular choice amongst Android users. It connects to the phone via a USB connection, so you’ll need to check that you have the relevant adaptors or ports needed to hook it up to your phone.

Can I plug a mic into the headphone jack on Android?

Providing the microphone you are using has a TRS jack connector, you can plug it into the headphone socket of your Android phone. This is assuming that the headphone jack is the same sized connector as the mic. Can You Use Bose 700 Headphones For TV?