Should I Plug My Headphones Into My Blue Yeti?

The Blue Yeti is a popular microphone for podcasters, musicians, and content creators. Its success is down to a combination of its reliable performance, clear sound quality, and affordable price tag.

The Blue Yeti is a popular microphone for podcasters, musicians, and content creators. Its success is down to a combination of its reliable performance, clear sound quality, and affordable price tag.

Should I plug my headphones into my Blue Yeti?

For certain purposes, plugging headphones into your Blue Yeti can be beneficial. Doing this allows you to hear the audio you record with the microphone in real-time, eliminating the chance of latency, which is a common problem when recording.

The headphone jack on the Blue Yeti is designed only to allow you to hear the audio as it is going into the microphone.

Therefore, it is not possible to hear the full mix of audio by plugging your headphones into the mic.

If you need to use your headphones for any purpose other than monitoring, you’ll need to plug them either directly into your computer or your audio interface.

In this guide, I’ll explain when plugging your headphone into the Blue Yeti is useful, and when you should use another option.

It’s quite rare to see a headphone output built into a condenser microphone, but this is one of the unique features of the Blue Yeti.

It often confuses people, as they are unsure whether plugging their headphones into this port would be more beneficial than connecting them to their computer.

In reality, plugging your headphones into your Blue Yeti and your computer both offers several benefits and drawbacks.

The headphone output on the Blue Yeti is designed for the sole purpose of monitoring the audio as it goes into the microphone’s capsule. On the other hand, plugging your headphones into your computer will allow you to hear all of the audio included in your mix.

When the headphones are plugged into a Blue Yeti, the vocalist can hear their voice as it is recorded in real-time.

This can also be achieved by using an external mixer or audio interface, but one of the common problems when using these devices is that they cause latency.

Latency is when you hear the audio with a slight delay, which can make it very difficult to focus on the timing and tone of the recording. It is a very common issue with digital recording setups, and sometimes it’s difficult to fix.

Furthermore, using the headphone jack on the Blue Yeti is a great way to monitor recordings in real-time without having to worry about latency.

If you want to hear other parts of the recording, such as an instrumental piece of music, or any other accompaniment to the vocals, plugging headphones into the Blue Yeti will not be suitable.

It is only capable of playing back the audio that is being picked up by the microphone capsule at that exact moment. 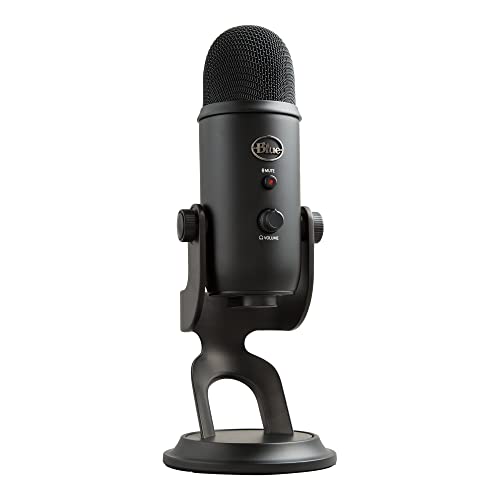 Prices pulled from the Amazon Product Advertising API on:

Product prices and availability are accurate as of the date/time indicated and are subject to change. Any price and availability information displayed on [relevant Amazon Site(s), as applicable] at the time of purchase will apply to the purchase of this product.

Plugging Headphones Into a Computer

The alternative to plugging your headphones into the Blue Yeti is to connect them directly to your computer, or a recording device such as an audio interface.

Rather than providing you with only the audio going into the microphone, this method allows you to hear the audio that you play from the computer.

When recording vocals for music, singers need to hear both the sound of their voice and the sound of the backing track so that they can stay on time and ensure they are singing in the correct key.

This is not so important when recording spoken word for podcasts, voiceovers, or any other purpose. However, it may still be necessary to hear other audio to cue certain parts of the recording.

When you connect your headphones directly to your computer, you will hear any sounds that are played by the system.

The recording software you use will likely have multiple tracks for playing back different audio tracks, and these will be audible in the headphones.

As I previously mentioned, if you’re using an audio interface for vocal monitoring there is a chance that latency could cause the playback to be slightly delayed. This makes it very difficult to speak or sing without being distracted by the delayed sound.

To put it simply, the Blue Yeti headphone output is only suitable for monitoring your recording.

If you need to hear any other audio, you’ll need to either connect the headphones directly to your computer or use an audio interface to combine monitoring with audio playback.

Which Is the Best Option for Gaming?

When it comes to gaming, audio is almost equally as important as the visual aspect. Game developers put a lot of effort into the soundtracks and audio of their games, as this makes them more immersive and enhances the overall experience.

It’s common for the Blue Yeti microphone to be used by gamers who live stream or record themselves when playing games. This is because the Blue Yeti is great at capturing spoken word, and has a practical design that can easily be mounted to a desk or table.

Headphones and headsets are essential when recording or live streaming gaming. They allow the gamer to hear the audio from the game, and also to monitor the sound of their voice as it is being recorded.

If you’re a gamer who uses the Blue Yeti, you might be wondering whether it would be beneficial to use the onboard headphone output on the microphone when recording. This depends on your personal preferences.

Plugging your headphones directly into the Blue Yeti will allow you to hear your voice as it is being captured by the microphone, without the risk of latency impacting your recording.

However, this will also prevent you from hearing the audio from the game in your headphones, as the Blue Yeti can only be used for monitoring rather than audio playback.

If hearing the in-game audio is important to you, then you’d be better off connecting your headphones to your PC or console rather than plugging them into the Blue Yeti.

You could potentially wear one headphone and play the game audio through speakers, but then you run the risk of the sounds being picked up by your microphone, which could affect the clarity of your recordings.

Do You Have to Use Headphones with Blue Yeti?

Using headphones with a Blue Yeti microphone can certainly be beneficial, but it isn’t essential unless you need to hear a backing track when recording. If you’re recording your voice without a backing track, you won’t need to wear headphones.

The main reason that people prefer to use headphones with recording is so that they can monitor the sound as it enters the microphone.

However, some people prefer to hear their voice without headphones – it is a case of finding out what works best for you.

If you’re recording instruments with a Blue Yeti, you will likely need to use headphones. This is because the instruments will probably need to be played in time to a metronome or other parts of the song that have already been recorded in your DAW.

For spoken word recordings, you can use a visual level meter to ensure that your voice is captured at a suitable volume, and therefore listening through headphones isn’t always required.

For more information on getting best headphones take a look at this YouTube video.

Bluetooth headphones cannot be connected directly to the Blue Yeti microphone, but you can connect them to your computer when recording. This is because the Blue Yeti has a 3.5mm jack headphone output, and doesn’t have wireless Bluetooth built-in.

If you connect Bluetooth headphones to your computer, they will work in the same way as wired headphones. This will allow you to hear the sound of the audio that is played back from your recording software.

You can therefore listen to the sound of the recordings made with your Blue Yeti, but won’t be able to use the headphones for monitoring.

Does the Blue Yeti Nano have a headphone jack?

Like the full-sized Blue Yeti, the Nano version also has a headphone output. This headphone jack is designed to minimize latency so that you won’t experience a delay when recording and monitoring using the microphone.

Is Blue Yeti owned by Logitech?

The Blue Yeti is a product made by Blue Microphones, which is owned by tech heavyweights Logitech. This company is renowned for its range of high-end recording and audio equipment, including mics, headphones, and processors.

Can you use Blue Yeti with an iPhone?

Some of the Blue Yeti models can be connected to an iPhone for direct recording. These models include the original Blue Yeti, the Yeti Nano, Yeti Snowball, and the Yeti Snowball iCE. All of these microphones require an Apple USB-C to USB adapter to be used with iPhones. What Are The Best Cloudlifter Alternatives?

What Does A Cloudlifter Do?