Pop filters are found in most professional and home audio recording studios. These useful accessories are designed to block plosives before they reach a microphone’s capsule, preventing unwanted noises from making their way into recordings.

While pop filters are effective at blocking the plosive sounds that are caused by the air pressure from a vocalist’s mouth, they don’t reduce other background noises. This can only be achieved by altering the signal-to-noise ratio of the recording.

There’s no denying that pop shields and pop filters have a positive impact on the clarity of vocal recordings. When a vocalist uses consonant sounds, this causes the air to be pushed into the microphone capsule, resulting in undesirable popping and hissing sounds.

These sounds are difficult to remove through processing and mixing. However, a pop shield is not a solution for reducing background noise.

In this guide, I’ll explain why pop filters won’t achieve background noise reduction and provide some alternative solutions that you can use.

Pop filters are designed to reduce certain noises in a recording. This explains why some people may assume that the filter would be capable of reducing background noises, but unfortunately, that is not one of its capabilities.

When a vocal recording is made, the vocalist stands in front of a microphone and sings or speaks into the capsule. The capsule is commonly protected and shielded by a grille, which also acts similarly to a pop shield, but is not as effective as it is positioned very close to the inner components of the microphone.

If there is no pop filter used for the vocal recording, the air pressure caused by consonant sounds will create “plosives”, which then come into contact with the microphone’s capsule.

This is likely to cause sudden spikes in the recording volume, leading to unwanted “pops” and “esses” being picked up by the mic.

The purpose of the pop filter is to block these sounds before they reach the microphone capsule.

Pop filters are made from mesh-like materials with tiny spaces so that the other sounds can travel through the shield while the plosives get minimized after being essentially trapped by the material.

Consequently, the loudness of the plosives is significantly reduced, resulting in a cleaner-sounding recording. Therefore, a pop filter is an effective tool for reducing unwanted vocal sounds in recordings.

This does not, however, mean that the pop filter is effective at reducing general background noises.

The only sounds it will reduce are the ones produced by the vocalist when they are positioned directly in front of the filter and singing towards the microphone capsule.

Any background noises, such as people talking in another room, the sound of traffic outside, or electronic devices making sounds while recording, will not be reduced by using a pop filter.

Nevertheless, there are ways that these sounds can be minimized effectively, which we’ll discuss later in this article.

Every modern microphone has at least one polar pattern. This feature impacts the directionality of the microphone, which simply means the angle that which it picks up sound when recording or being used for live performances.

Different polar patterns cause the microphone to be more or less sensitive to sounds coming from specific angles. Some microphones have multiple polar patterns installed, which makes them more versatile when recording different instruments, vocals, and other sounds.

Polar patterns also impact the amount of background noise that is present in a recording.

The sensitivity of a microphone is measured in decibels (dB). Cardioid polar patterns, which are the most commonly used for condenser microphones, cause a reduction in the decibels of sounds that enter the microphone from the sides or the rear of the capsule.

Consequently, using a microphone with a cardioid polar pattern will minimize any background noise that occurs from anywhere other than in front of the capsule. This makes it an effective tool for minimizing background noises, especially when compared to other polar patterns.

That explains why condenser microphones with cardioid polar patterns are the preferred choice of vocalists.

They ensure that the singer’s voice is amplified, while any background noises coming from stage monitors, instruments, or backing tracks aren’t picked up as clearly.

This polar pattern is useful for blocking out background noise that occurs from either side of the capsule and is especially effective if two people are singing simultaneously. One of the vocalists can sing in front of the capsule, while the other sings from the rear.

Another popular polar pattern is omnidirectional.

This variety picks up sound equally from all angles of the microphone, which makes it a good choice for recording full bands or ensembles. However, omnidirectional polar patterns are likely to pick up a lot of background noise.

Using an omnidirectional microphone to capture the sound of a room is a great way to enhance your recordings, but if you aim to reduce background noise, this polar pattern should probably be avoided.

If you’re aiming to reduce background noise, one of the main things you need to consider is whether a condenser or dynamic microphone will achieve this. These two types of microphones have several pros and cons and are best suited to specific purposes in a recording environment.

Background noise can tarnish a good recording, so you must choose the right microphone to avoid this problem from occurring.

Generally speaking, a dynamic microphone is best suited to recording loud sounds, such as drums, amplified guitars, or powerful vocals.

This is because a dynamic microphone is less sensitive than a condenser mic. It can therefore handle the high volumes of cymbals, snare drums, or guitar amps without also picking up the other sounds in the room.

Condenser microphones, on the other hand, are significantly more sensitive than their dynamic counterparts. This makes them ideal for capturing acoustic instruments such as guitars, pianos, or relatively quiet vocal takes.

If your sole aim is to avoid picking up background noises when recording, the best way to do this would be by using a dynamic microphone like the Shure SM57.

This type of microphone has a cardioid polar pattern, so it predominantly picks up sounds that are coming from in front of the capsule. 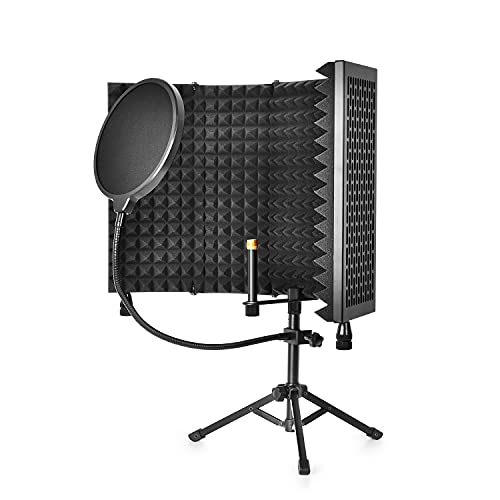 Also, due to the relatively low sensitivity of dynamic microphones, they are much less likely to pick up background noises.

However, they don’t capture instruments or vocals with the same level of detail that a condenser microphone can, which is why many vocalists prefer to use condenser mics.

The most effective type of microphone for reducing background noises in recordings would be a dynamic mic with a hypercardioid polar pattern.

The combination of low sensitivity, high SPL handling, and directionality which focuses solely on the front of the capsule makes this the ideal microphone for the aforementioned purpose.

Condenser microphones are undeniably great for picking up the finer details of an instrument or vocal track. If there is no background noise, then using this type of microphone will achieve the clearest recordings.

However, with the additional attention to detail comes a trade-off in terms of the microphone’s ability to reject background noises. Certain polar patterns impact this, as we covered earlier in this guide, but they won’t completely minimize background sounds.

Check out this YouTube video that explains polar patterns.

Do you need a windscreen and a pop filter?

It is not necessary to use both a windscreen and a pop filter together unless you’re recording in an environment where wind can enter the microphone capsule from the rear when recording vocals.

Is a pop filter necessary?

Using a pop filter is an effective way to minimize the sound of plosives in your vocal recordings. All singers use plosives, so a pop filter should be seen as an essential piece of equipment if you want to ensure maximum clarity when recording.

How far should a pop filter be from a mic?

Ideally, a pop filter should be positioned around 5 inches away from a microphone’s grille. This will ensure that the plosives can be captured by the mesh material before they enter the microphone capsule.

Can You Use 2 Pop Filters

For more information on this subject be sure to check out this article. Is the Blue Yeti Good for Recording Instruments? How Do Streamers Sound So Good?