Audio mixers and audio interfaces are two different devices, but some of their capabilities and functions cross over. If you’re a live streamer, you might be wondering whether you need a device for mixing audio.

Audio mixers and audio interfaces are two different devices, but some of their capabilities and functions cross over. If you’re a live streamer, you might be wondering whether you need a device for mixing audio.

Do you need an audio mixer for streaming?

Although it isn’t necessary to have an audio mixer to stream content, using one will make the process much easier. If you are only using one audio input, an audio interface will do the job, but if you are using multiple inputs, you’ll need a more extensive audio mixer.

There are so many audio interfaces, mixers, and recording devices available these days that it can be challenging to sift through the options and find the best one for your requirements.

You need to consider the type of streams that you intend to create, along with the other equipment that you’ll be using.

We’ll cover all of this and more in this comprehensive guide.

Do Twitch Users Use an Audio Interface?

Twitch users that use a microphone are highly likely to use an audio interface. The only exception to this would be if they were using a USB microphone that connects directly to a computer and it doesn’t require an external audio interface or mixer to work properly.

Using an audio interface for Twitch streaming allows the content creator to connect one or multiple microphones to their computer. They can then set the gain levels so that the microphones are at a perfect volume and adjust other settings to make their stream run more smoothly.

Audio interfaces are an integral part of the majority of digital audio setups, whether this is for live streaming or recording. They act as the link between the microphone and the computer or laptop.

The audio interface then receives the audio signal from the microphone, converts it from digital to analog using an onboard DAC, amplifies it, and shapes the sound before outputting it into the computer, where it can be streamed and recorded on Twitch.

Whether you’re a podcaster, gamer, musician, or video creator, having an audio interface will make your life much easier when creating content. You don’t even need to invest in a high-end model if you’re only going to be recording your own voice; you can opt for a basic, compact interface.

Next time you’re watching a Twitch stream, look out to see whether the streamer is using a microphone with an XLR cable. If they are, then they’ll almost certainly be using it with an audio interface.

The Best Audio Interfaces for Streaming

There are so many excellent audio interfaces to choose from that it can be a little overwhelming trying to find the best option for your streaming needs. Some interfaces are best for music production, others are better suited to podcasting, and some are perfect for streaming.

The first thing that you need to decide is how many inputs you need from an audio interface. If you are only going to be using one microphone, then you can choose a compact option with one mic input, like the Focusrite Scarlett Solo 3rd Generation.

Check out this video from Focusrite on YouTube. It shows how to get your Audio Interface set up with OBS which is a popular streaming option.

This popular audio interface includes a high-quality mic preamp that will ensure your records sound clear and unaltered, and it also has easy-to-use controls for adjusting the gain, monitor levels, and the levels in your headphones. It’s very small, so it won’t take up too much room in your streaming setup.

If you intend to have other people on your live streams at some point, then you’ll need more than one microphone input. It’s worth trying to predict the maximum number of people you’re likely to have in your streams in the future to avoid you needing to purchase a more extensive interface further down the line.

For a two-mic setup, I’d recommend an audio interface similar to the M-Audio M-Track Duo. This device is perfect for streaming, with simple controls, a good headphone preamp, and all of the connectivity options you need to create high-quality recordings of your content. 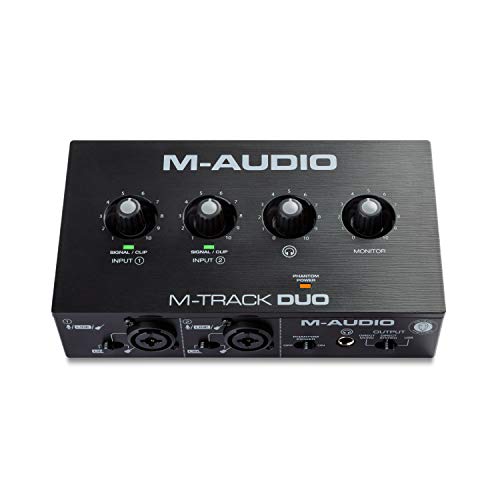 For streamers who want to have a lot of microphone inputs to potentially use, the Focusrite Scarlett 18i20 3rd Gen is one of the best options available. This is the larger version of the Solo model we recommended, and it comes with the capability to record eight microphones simultaneously.

Can You Stream Without an Audio Interface?

Although most streamers use an audio interface to connect their microphone to their computer or laptop, it is possible to stream without using this piece of equipment. The easiest way to achieve this would be to use a USB condenser microphone, which connects directly to the computer.

USB mics have improved dramatically in recent years, as manufacturers have recognized the demand for more simple setups. They don’t require external +48v phantom power, as this is provided through the USB connection to the computer.

It’s also possible to get USB dynamic microphones, like the Shure MV7. These are a good choice for streaming with multiple people, as they don’t pick up as much external noise as a USB condenser microphone does.

Rather than connecting the microphone to the input on an audio interface via XLR cable, you simply plug the USB cable into the port on your computer or laptop. Then, you can select the microphone from the available recording devices in the software that you use.

This can be a practical solution for streamers who want their setup to be as portable as possible, but using multiple USB microphones to stream with isn’t advised. This could cause issues with the recordings or lagging problems, so if you want to use multiple mics, I’d recommend investing in a multi-input audio interface.

Another way that you can stream without needing an audio interface is by simply using your smartphone. Some phones will work better for this purpose than others, depending on the quality of the camera and the onboard microphone.

You could connect an external mic to the phone if you wanted to improve the audio quality while streaming. Also, it’s important to ensure that you have a good internet connection; otherwise, the stream will not be high quality.

Phone cameras are so good these days that it’s difficult to tell when footage is being streamed or captured from them, but the onboard microphones aren’t as good as a capable condenser or dynamic mic explicitly designed for content creators.

Thanks to the abundance of apps that are available on iPhone and Android devices, you can even edit and process your streams using your smartphone in a similar way that you could when using a computer. The editing capabilities of phones for footage and audio have come a long way recently.

Overall, although there are several ways that you can stream without using an audio interface, using one will make the process much easier. The interface provides other benefits, such as allowing you to monitor and adjust the levels of your mics, headphones, and speakers.

Do I need a preamp for streaming?

Audio interfaces have mic preamps installed on their inputs, so if you’re using one of these devices, then you won’t really need another preamp for streaming. However, preamps can provide gain boosts to quiet dynamic microphones like the Shure SM7B.

Although it’s not essential to wear headphones while streaming, doing so makes it easier to hear the sound of your voice and all of the other audio that plays during the stream, without headphones, you won’t know if there’s an issue with the recording.

Can streamers use earbuds?

Earbuds are a great option for streamers because they are generally more comfortable to wear than over-ear headphones. They also are less likely to distract the viewer’s attention due to their discreet design. How To Connect AirPods To PC Without Bluetooth